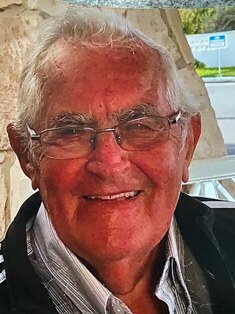 Please share a memory of Frank to include in a keepsake book for family and friends.
View Tribute Book

Frank Henry Bonvarlez was born in Chatham, Ontario in 1934 to Louis and Marie (nee DeBusschere) Bonvarlez. Frank told wonderful stories about growing up on Wellington Street, attending St. Joseph School, and then CCI where he met the love of his life, Pat Bedell. Family meant everything to Frank, and Frank was loved greatly in return.

Frank and Pat were partners in all aspects of their lives. When he was young, Frank worked at Howe’s Meat Market in Chatham. He worked at Ontario Hydro for seven years, then he and Pat raised their family and business in the heart of Dover Centre. What started with Bedell’s Locker and Freezer Service and Murdock’s General Store became so much more.

Frank was the founder of Bedell’s Frozen Foods and Great Lakes Ice. Frank and Pat enjoyed all aspects of the ice business, especially working to grow the company with Brent and Mike, and the friendships they forged with their employees and their families. Frank was a man of many talents. He was a boxer in his youth and played hockey. His commitment to community found expression in his involvement with the Knights of Columbus, and he and Pat spent many Saturday nights on the dance floor at the K of C hall. Frank was instrumental in the fundraising for Northside Arena, on the Bayfest organizing committee, and spun a great wheel at many Turkey Raffles.

For years, Frank and Pat (aka Mr. and Mrs. Santa Claus) made Christmas extra-special for countless children. In his retirement, Frank enjoyed fishing, playing cards, and spending time with family and friends. Frank was a kind, generous man who left the world a better place. He was a true gentleman who took genuine interest in others and always had time for a visit, which usually included at least one of his famous one-liners.

In Dover Centre, Mitchell’s Bay, and Chatham, at their family cottage on Lake Erie and during their many happy years in the Bahamas, Frank and Pat and the whole Bonvarlez gang made life-long friends, too many to mention. We hope you will remember Frank by toasting his life with a ‘Pour at Four.’

Special thanks to the outstanding staff at Meadowpark for the excellent care they provided to Frank.

Please sign up for the mass only at www.signup.com/go/AmeVuiC or call the funeral home.

In lieu of flowers, please consider a donation in Frank’s memory to the Alzheimer’s Society or Outreach for Hunger.