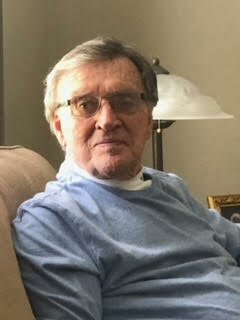 Please share a memory of Robert "Bob" to include in a keepsake book for family and friends.
View Tribute Book

Those attending mass are asked to wear a mask in consideration for the health of Gloria Fenlon.

Those that are unable to attend the mass can watch the livestream at the following link:

Bob was born in Port Arthur, Ontario August 27, 1927, just seconds after his identical twin brother, Bill.  He attended St. Andrew’s School where he and Bill had great fun standing in for each other to torment the good nuns.  At 18 he met the love of his life, Gloria, at the Catholic Youth Club.  He decided that night that she was the one.  They celebrated their 72nd wedding anniversary three weeks ago after 77 years together.  Theirs was an extraordinary marriage, full of love and laughter.  They were all things to each other, inseparable until Gloria’s move to long term care.  It is no surprise that Bob did not go on long without her by his side, dying only a few weeks later.

Bob was a man of great intelligence, wit and curiosity, reading at least 3 papers a day and following breaking news at all hours.  His home was always full of the music he loved---Strauss waltzes, classical piano, and New Orleans jazz.  Bob had a gift for making people laugh, especially in tough moments.  He had a gift for storytelling and play; children were drawn to him.  All of his grandchildren stayed close, travelling long distances to visit.  His children remember long summers of diving from his shoulders into the waves at McKenzie Beach.

Bob had a long career, running a successful real estate business.  He was known for his integrity and commitment to his staff and clients.  Retiring at 60, he devoted his time to chairing the Housing Authority, to many other volunteer activities, including leading the drive to build a band shell in Waverley Park to bring music to others.

At the centre of Bob’s life was his Catholic faith and family.  He was a good man, generous with his love.  We will miss him, but love endures.

In lieu of flowers, a donation to Epilepsy Canada or the Interfaith Caring Kitchen (please donate through funeral home) would be appreciated.