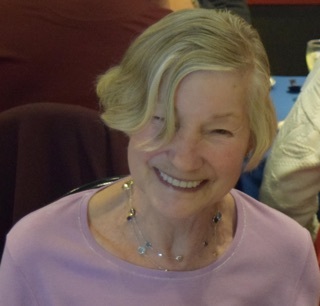 Please share a memory of Rhona to include in a keepsake book for family and friends.
View Tribute Book

Rhona fought cancer five years ago and won, but the battle took its toll. Our family is grateful to have had the extra time to spend with her. Nothing was left unsaid.

The entire family thanks the staff at CKHA for their compassionate and professional care during Rhona’s three week stay. They were also so wonderful to the family as we stood by her in her last days.

Rhona was born and raised in Kent, England, immigrated to Canada in 1966, landing in Montreal with her husband and a four-month-old child to start a new life. From there Rhona and Bob took another leap and moved to France while Bob trained with Michelin. They returned to Canada to relocate in Pictou County, Nova Scotia, where the family spent the next ten years. While the time spent in Nova Scotia was wonderful, Rhona and Bob wanted more for their family. They took another leap of faith to move across country. The final destination was to be British Columbia but Ontario, in particular Firestone, called and they settled in Southwestern Ontario. The family was never further than 7 hours apart and actively worked to stay closer together. Once retired, Rhona and Bob moved to Chatham-Kent to be closer to Tania and soon after Amber moved to London, from Ottawa.

Rhona worked many different jobs, whereever she lived. But her first priority was always family. The lynch pin that held us together, she was fierce in her protection and devotion to family. As mother, Rhona inspired a love of reading and organization in her daughters from an early age, as well as a passion for gardening, a love of knitting, a love of jewelry, and whimsy. Rhona’s other defining characteristics included chief cheerleader, comedian, comforter, fabulous cook and baker, and to Bob, friend and lover.

Rhona made friends wherever she moved, always able to make connections and make people feel special. Nurturing and supporting them, Rhona also gathered extra daughters and sons wherever she went.

Rhona will be dearly missed and never forgotten by many. Farewell for now Momma, Mommala, Mom, Mamma Bear, Mooma, Mrs. L, Grandma, Sweetheart, Queen Bee, Mighty Mouse and Butterfly, the many names of our darling Mom and Rhona.

In lieu of flowers the family asks for donations to CKHA Foundation, Outreach for Hunger or the Salvation Army food bank, or a charity of your choice.