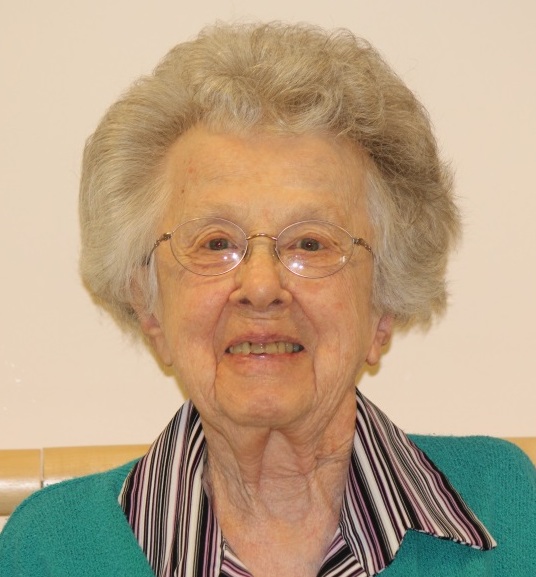 Please share a memory of Sr. Angela Theresa to include in a keepsake book for family and friends.
View Tribute Book

Hoffman, Sister Angela Theresa (Theresa Cecelia), entered Eternal Life on August 10, 2022 in Chatham, Ontario.  She was born in Zurich, Ontario, in 1925, the daughter of the late Simon and Caroline (Regier) Hoffman.

She entered the Ursuline Sisters of Chatham in 1943.  During those years she served as teacher in Windsor, Wallaceburg, Woodslee and Bradford, Ontario and in Grayson, Saskatchewan.  In 1962, Sister helped found the Ursuline mission in Peru and taught in Colegio Santa Angela in Chiclayo until 1969.  From 1990 to 1994 she worked in Urrunaga, Peru.  Sister also spent 3 years at the house of prayer in Tilbury, Ontario.  In more recent years she has lived and worked at “The Pines” and Villa Angela, did jail ministry as well as being an active member of the charismatic prayer group.  She is survived by sister, Doreen Ducharme and brother, Wilfred and his wife Stella, and sister-in-law Irene (Leo) and several nieces and nephews.  She is predeceased by siblings George, Leonard, Joseph, Anthony, Albert, Rose Traher, Leo, Brother Edgar, CSR and Mary Ducharme.

Relatives and friends are invited to visitation at the Hinnegan-Peseski Funeral Home, Chatham on Friday, August 12th from 7:00 p.m. to 9:00 p.m. The Mass of Resurrection will be celebrated on Saturday, August 13th, 2022 at 10:00 a.m. at Blessed Sacrament Church, 145 Victoria Avenue, Chatham. Interment will be in St. Anthony’s Cemetery.

The Ursuline Sisters would appreciate mask wearing during visitation and at Mass.

Donations in memory of Sister Angela Theresa may be made to “Chatham Ursuline Charities”, 20 Merici Way, Chatham, Ontario N7L 3L8 or to the charity of your choice.