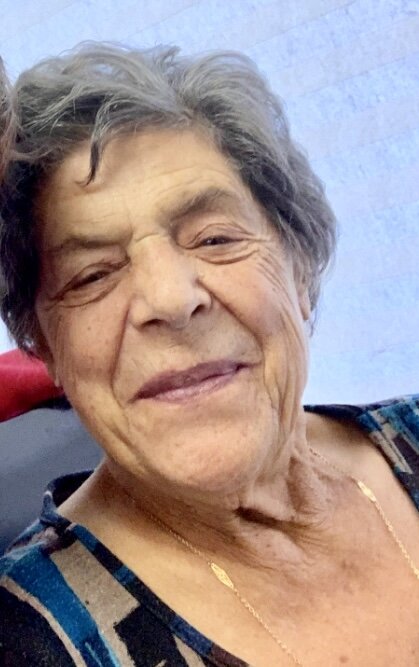 Please share a memory of Leona to include in a keepsake book for family and friends.
View Tribute Book

They were newlyweds in their early twenties when Leona and Geno Matteis crossed an ocean to begin their life together in the “New Country”. They'd met at 14. Geno had spotted her on a hill in their village, leading a cow home from pasture. It was love at first sight, and they never looked back.

What they built in that lifetime was broad and extraordinary.

Their first-born, Josie, arrived not long after they’d landed in Canada. All three of them became active members in the St. Joseph’s Catholic Church community. Leona was a member of the Kaycettes and Catholic Women’s League. Geno was a Knight of Columbus and a church usher.

Geno’s father had been a founding member of the Italian-Canadian Club. Their ancestry was core to who they were and how they celebrated life. The couple sponsored loved ones from Italy, and supported them as they arrived in Canada - including Leona’s younger siblings, Maria Mastromarino and Tony Follo.

Leona’s first job in Canada was as a “candy striper,” making patients' beds, and keeping St. Joe’s Hospital humming, as she worked alongside her beloved sister-in-law, Diane Mariconda.

Geno wanted to pursue agriculture, but Leona saw another path for him. He found work with the City of Chatham, where he loyally stayed for 38 years.

They balanced work and life, enjoying lots of time and celebrations with extended family and friends.

Leona ran their food business — a grocery store — now occupied by the Williams Street Cafe. Their shop specialized in European goods, for the newcomers who missed the comforts of home, and for Canadians looking for something different. And they both took care of the apartment building they had invested in, which is now the site of the Chatham mall.

After the birth of their second daughter, Stephanie, Leona sold the store to be home with her. It was a gift to have that time together, and just one of the countless examples of how Leona put family, connection, and love above all.

Geno eventually got that little farm he’d dreamed of, and the two of them took great pleasure in the joys of agrarian life — running an organic farm before that was officially a "thing", with a small tomboy delighting in country living while her big sister was away at university.

When Geno’s health declined, Leona was at his side daily, caring for him. Geno used to brag he married an older woman. Leona was born six days before him. They were married for 63 years.

Through her life, Leona led by example, how to love and laugh. Always. To be strong and positive. To look at the bright side. Always.

Peacefully at St. Andrew’s Residence, Chatham on Monday September 19, 2022, Leona Carmela Matteis of Chatham, beloved wife of the late Generoso Matteis (2014).  Born in Castelvetere Sul Calore, Italy daughter of the late Clelia (DeCristofaro) and Soccorso Follo. Loving mother of the late Josie (2015) and Gabriel Doto and Stephanie Matteis. Cherished grandmother of Gabri and Sasha and the late Anna (2019).
Dear sister of Maria Mastromarino and Tony and (Jennifer) Follo and cherished sister-in-law to Diane and Eddie Mariconda, and Pat Matteis.

Predeceased by a sister Mafalda Meriano and brothers-in-law Pasquale Mastromarino, Joseph Matteis, Tony Matteis, Michael Matteis and sisters-in-law Mary Matteis and Brenda Matteis.  A Funeral Mass will be celebrated on Monday October 3, 2022 at 11AM in St. Joseph’s Church.  Burial will be in St. Anthony's Cemetery. An evening of celebration of Leona's life will be held at Links of Kent (120 Indian Creek Rd W, Chatham) from 4:30-8:30PM that night.