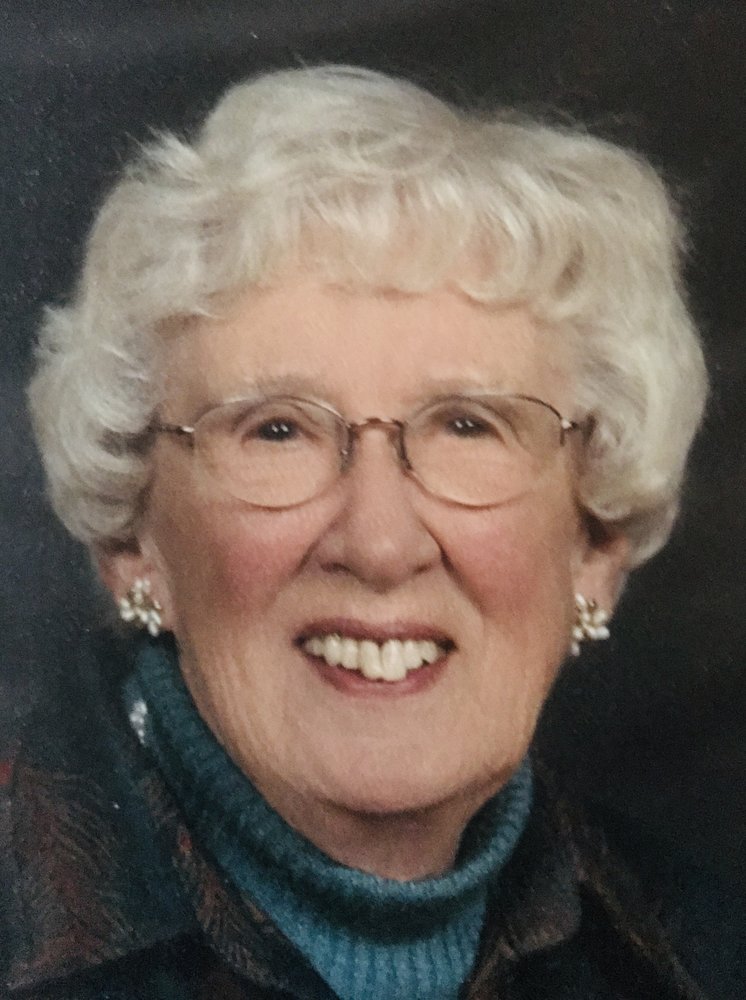 “Bloom where you are planted” was a saying that our mother, grandmother, aunt and friend Margaret Johnson lived by. Now that we have to announce her passing, on Wednesday, December 5, 2018, it is up to us to live by those words. Margaret, the daughter of Julius and Audna (Calder) Voigt, was born in 1925 into a homesteading family near Denholm, Saskatchewan, a place that was never far from her thoughts. Forever marked by the Great Depression, Margaret lived a life of care and thrift, where selflessness and service to others were absolutely central to her. She grew up in a busy, multigenerational home with her Granny Calder, her sisters Helen (Horn), Gladys (Pegg) and brother Julius (known to all as Bud), along with her Calder cousins from down the road, the hired men and the schoolteacher. Having travelled east during WWII, with stops in Fort William and Amherstburg, she met a Kent County boy, Lewis Johnson, in Fort Erie in the heady days after the war. Soon married, they made a life together in Chatham with their family, Jeff (Lorna), Jennifer, Ian (Sherry), Eric (Donna) and Andrew (Elise). There she became a full member of the vast Johnson clan, enjoying many Sundays at the family farm in Charlemont and the cottage on Walpole Island. In Chatham, Margaret was deeply involved in the life of Victoria Avenue United Church, playing piano for generations of Sunday-school kids, and later rolling up her sleeves for social justice through working in their outreach programs. For many years Margaret organized the Kiwanis Music Festival, a role that introduced her to many, including her devoted friend Jean Peck. Always chatty and curious, and when most people were thinking about retiring, she fit right in as a cashier at Woolco, and later Walmart, where she earned her independence, while she got to know all the regulars and kept abreast of all the doings in Kent County. A traveller, Margaret enjoyed summers in Saskatchewan and Alberta with family, and after Lewis died, she explored far and wide with adventurous trips to the Blue Mountains of Jamaica, the furthest corners of Thailand, and beyond. While she slowed down in her later years, she focused on her plants, supporting Symphony London, and honing her opinions, especially her deep dislike of the narrow-minded and the prejudiced. Always sharp and interested, Margaret fostered deep connections with many nieces and nephews, most especially with Pam Bruhlman, Betty Mason and Lyle Voigt, people who accepted who she was and where she came from. Margaret leaves thirteen grandchildren, two great-grandchildren, a sea of dear nieces and nephews, and four surviving Johnson in-laws, Fred and Phyllis, and Dan and Cherie.

Memorial donations can be made out to Victoria Avenue United Church’s Outreach Program.