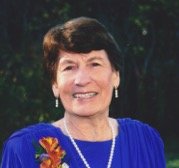 Please share a memory of Theresa to include in a keepsake book for family and friends.
View Tribute Book

Faith, family and friends framed Theresa’s life and she had an abundance of all three.  She was a stay at home mom, raising her six children, before undertaking a career as a medical secretary later in life.  Theresa was happiest when her house was filled with chaos and laughter. She was lovingly committed to her role as a wife, mother, grandmother, and great-grandmother and loved all of them dearly. Her extended family including each of her more than fifty nieces and nephews held a special place in her heart.  During her long life, Theresa experienced the Great Depression, a World War, an international pandemic and the joys and demands of raising a family of six children.  She proved to have an unwavering resiliency, like many of her generation, which she called upon often when met with life’s challenges.

Those who knew her best were witness to her dedication to caring for others and experiencing life to its fullest.  Her spirit of adventure took her travelling around the world where she could be found sightseeing from high atop a camel, racing on the back of an ostrich or tubing down a gorge in an inner tube.  In 1985, Theresa followed two of her sons to Botswana, Africa where she was inspired to initiate a mission that, over the next thirty years, raised funds to establish the St. James Catholic Church and the Mother Teresa Resource Centre for Youth in Francistown, Botswana. This mission demonstrated her commitment to her faith and her concern for others that exemplified her life.

Theresa enjoyed golfing, events at the Active Lifestyle Centre, exercising at the YMCA into her 90’s and playing pepper with her many special friends from the golf course.  Those who challenged Theresa to a game of golf, cards, bocce ball or shuffleboard would soon come to learn that her competitive spirit was unrivalled.

The family would like to express their gratitude to the staff at the Village on the Thames for the exceptional care and friendships shown Theresa over the past several years.  A private family funeral service will be live-streamed from Blessed Sacrament Church beginning at 11:00 a.m. on Thursday, February 11 with Rev. Jude Ogbenna officiating.  Private family burial service to follow at St. Patrick’s Parish Church in Merlin.  A celebration of Theresa’s life will be arranged at a later date when it is safe to do so.

Per Theresa’s wishes, in lieu of flowers, please consider a donation to Canadian Food For Children (CFFC –CK) by visiting the link to CFF-CK at https://www.canadahelps.org/en/charities/canadian-food-for-children-chatham-kent/ or a charity of your choice.

The live streamed service can be accessed through the Chatham Catholic Family of Parishes website using the link https://ccfp.dol.ca/live-streamed-mass.