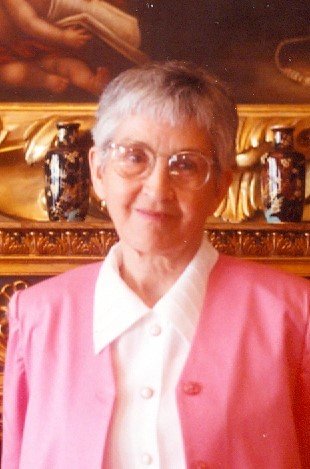 Please share a memory of Sr. Rita to include in a keepsake book for family and friends.
View Tribute Book

She was born in in 1925, the daughter of the late Emereal and Yvonne (Lavergne) Lavoie.  She entered the Ursuline Sisters of Chatham in 1944.

She was Directress of Formation for 2 years and on the General Leadership Team for 4 years.  From 1986 to 1993 Sister was a missionary in .  On her return to , she was a residence don and local leader at , .   From 2001 to 2008 Sister lived in and eased into retirement.

Due to COVID restrictions, a private prayer service will be held.  Interment will be in St. Anthony’s Cemetery.

Donations in memory of Sister Rita may be made to “Chatham Ursuline Charities Inc.”, 20 Merici Way, Chatham, Ontario N7L 3L8 or to a charity of your choice.

The Hinnegan-Peseski Funeral Home, 156 William St. S., Chatham is in charge of arrangements.

A Memorial Tree was planted for Sr. Rita
We are deeply sorry for your loss ~ the staff at Hinnegan-Peseski Funeral Home
Join in honoring their life - plant a memorial tree
Online Memory & Photo Sharing Event
Online Event
About this Event